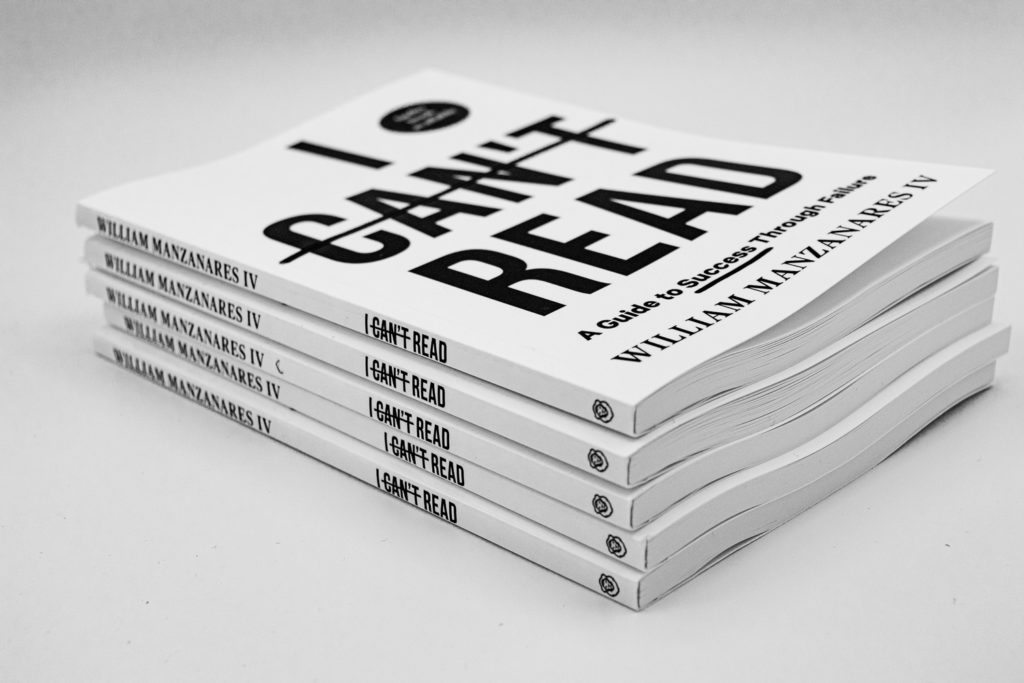 William Manzanares is the author of I Can’t Read.

When I first announced my book’s title, a lot of people didn’t understand it. Folks in my writing group said, “Shouldn’t it be titled I Can Read?” They didn’t realize that to this day, I still can’t sound out words. My book isn’t about learning to read; it’s about thriving and finding my strengths in spite of—and even because of—my struggles with reading.

I titled my book I Can’t Read because I want people who share my struggle to know that this book is for them. But my title was also inspired by my friendship with an incredible man named B.G.

When I met B.G., he’d been living at a homeless shelter where one of my employees volunteered. When B.G. found out where my employee worked, he began showing up to one of my businesses, offering to help however he could. My employees gave him money or bought him things to eat, though he never expected any of it in return.

I hadn’t heard about him until it came to my attention that one of my employees abused his generous nature, taking advantage by having him pick up garbage without offering him anything. I was less than happy with that fact, so the next day, I introduced myself to B.G. I liked him immediately, and we got to know each other well.

Never so well, though, as on a short road trip we took together.

I’d rented a truck to move some equipment for one of my businesses and asked B.G., along with another employee, to help. During the drive, I told my employee about how I wanted to write a book for people with reading difficulties. I told them that I was bouncing around the idea of “I Can’t Read” for a title. At that moment, B.G. piped up from the back seat. His eyes were lit up with excitement.

I was shocked. I decided to test him—not because I didn’t believe him, but because I wanted to see exactly what he meant by saying he was unable to read—to see if it meant the same thing to me as it did to him. I pointed out street signs and billboards as we drove. He sounded them out, most with only a small amount of difficulty. We then approached a sign for a street named Weyerhauser Way. I knew people who could read who struggled to pronounce that one. Even though he had to sound it out slowly and deliberately, he was able to say it. I was amazed.

He talked about taking an aptitude test at a point in his life that had to do with his present situation. While the circumstances of that time aren’t important, what is important are the results. He failed a standardized test that identified him as one of the millions of people in our country unable to read, even though he showed with the signs that he clearly could.

I told him so, but he didn’t believe it, or wouldn’t, so I decided to tell him something else.

“There’s a specific reason I’m writing this book,” I said. He guessed that it was because I was a successful businessman who wanted to pass on that success to others.

B.G. could do what I couldn’t, even though he didn’t believe in himself. Despite his struggles, he had a huge amount of passion behind reading. He had powered through Outliers by Malcolm Gladwell and learned about the 10,000-Hour Rule. The principle behind the 10,000-Hour Rule, as Gladwell describes it, is that anyone can master any skill with 10,000 hours of practice. B.G. practiced reading.

People in his life had failed him, which led to his present circumstances. Some people couldn’t see beyond his homelessness, but he was an intelligent, insightful man who understood concepts that many people working a nine-to-five job couldn’t grasp.

My conversations with him ultimately convinced me that my book could help people, especially those who wanted support and guidance without having to tell the people around them that they couldn’t read.

B.G. inspired me, and his story is always in the back of my mind. The people in my writing group may not have understood my title, but I didn’t write the book for them; I wrote it for the people who see the title and get it instantly, for the people who have struggled to read since they were first taught how to sound out words. I wrote it for the reader who reached out to me to say, “I get it. I struggle with reading every day of my life. Thank you.”

We are out here, in all walks of life, sharing the same struggle. If you can relate, then I Can’t Read is for you.

To learn more about William’s story and how he succeeded with reading struggles, check out I Can’t Read. If you’re more of an audiobook lover, you can find that version of the book at rebrand.ly/icantread. The ebook is available on Amazon.