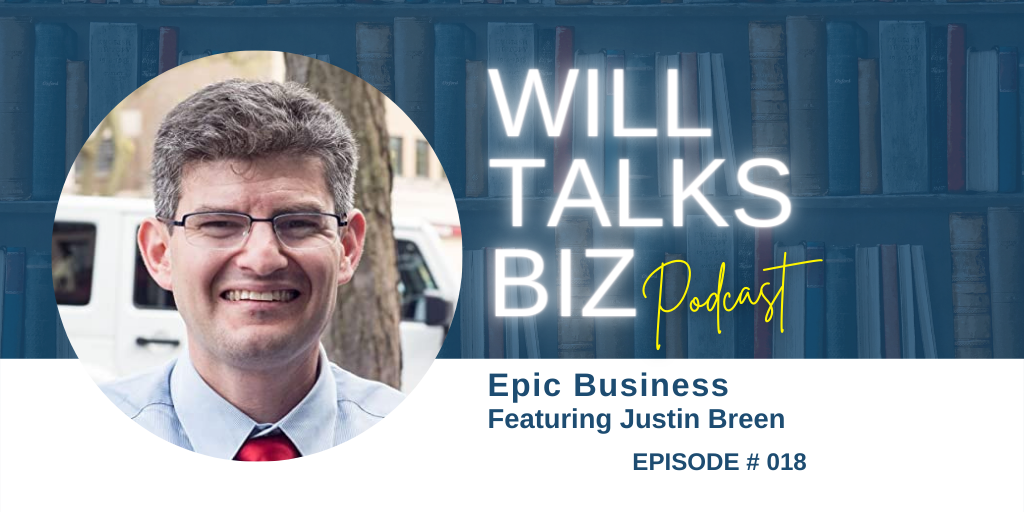 Justin Breen joins us to give us a glimpse into the knowledge and experiences shared in his book, Epic Business. In addition to being a husband and dad, he runs two global companies, both a PR firm and a SaaS platform.

{4:02 } Justin shares that the greatest joy of being an entrepreneur is showing my son’s that this world exists. It was not something he thought he wanted to do, but when his salary was cut in half he knew he had an opportunity to do something about it.

{7:21} All he heard over and over is people say, “we are tired of being the best kept secret”. He took that problem and started creating solutions, specifically for visionaries.

{10:37} Justin differentiates entrepreneurs from business owners by detailing the many things a business owner has to monitor. Those include revenue, office space, employee count, and bottom line. Visionary entrepreneurs are more focused on purpose, control of their time, profit, and changing the world.

{11:42} There are four stages Justin has observed when starting a company. Get to get, get to give, give to get, give to give. Entrepreneurs tend to exist in the give-to-give area, but only to the people that get it. They don’t spend time giving to someone that doesn’t get it because they are not going to get introduced to someone that gets it.

{14:01} Entrepreneurs look at things are investments, not costs. It is important to get out of the trap of seeing things as a cost instead of investing in what it will take to happen.

{16:45} Justin shares that there are four things that separate entrepreneurs from others. Those include bankruptcy or near bankruptcy, highest form of anxiety, depression, and some type of trauma or traumatic event earlier in life. Many people would see those as excuses. However, he says entrepreneurs never see excuses as an option. That is what gets them to that higher level.

{20:32} Justin’s three suggestions for creating an epic business:  1) Give yourself time with no excuses 2) do what you like to do and what you’re good at 3) Only partner with people who see things as investments, not costs.

“The formula for creating a successful global company is to see a problem, create a solution, problem solve.”

Book I Can’t Read: A Guide to Success Through Failure